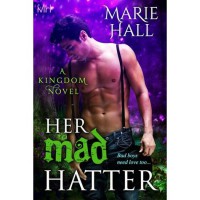 I've been meaning to review Her Mad Matter ever since I finished it but other books came in the way. Yadayada, you know how it goes. Still, I wanted to write one for this book because I enjoyed it so, so much.
Just like Alice's character in this book, you could say I'm obsessed with the Mad Hatter. I love anything about Alice in Wonderland and I just adore Marie Hall's take on Wonderland and everything fairytale in this book. So when I found it for free on Amazon I knew I had to start it soon. It's also not a very long book, only 130 pages so I finished it in less than a day. I couldn't and would't stop reading.

Her Mad Hatter starts out with an awesome fairy godmother named Danika trying to find the 'bad five' mates. I seriously love this aspect of the book and I can't find out what's in store for the other four bad boys. Secretly I wish I could go straight to Hook's story... Anyway, one of the bad five happens to be the Mad Hatter from Wonderland, which obviously is this first story of this series is about. Over time Danika tries to find the right Alice for Hatter because his madness is slowly overtaking him but she never succeeded. Once they thought to have found the right one but that went miserably wrong. So Hatter basically had given up on the thought of someone special for him. Until Danika found Alice Hu who runs the Mad Hatter's Cupcakery and Tea Shoppe. Alice can't believe Wonderland is actually real and that the Mad Hatter is, too. Although afraid to open up to another Alice, the Mad Hatter can't deny his feelings for this Alice for a long time...
The only question is will she be the one that stays?

Aside from the fact that I love Wonderland and fairytales and everything, this book reminded me a little but of the tv-series Once Upon a Time, which I love so much. So it was hard not to obsolutely fall for this book. It has a very original take on all things Wonderland and like this series' catchphrase says; "Bad boys need love too." Damn straight! I can't wait to discover the other books in the series and read about the other bad five.
The only slightly negative thing I have to say is that I wasn't too thrilled with the ending although it all ended pretty good for Hatter and Alice. Overall it wasn't such a great ending as I expected but that's just a minor thing compared to the whole story.

All in all, Her Mad Hatter was such a great story about some of my favorite characters ever. It's wonderfully written, a great story overal and very steamy. Who knew madness could be so delicious?
Tweet